The Society publishes a number of books and pamphlets covering local history and architecture, which can be purchased directly from us. Details are shown below.

Links to our most recent Annual Reports and previous copies of our annual publication for members, celebrating the architecture, people and history of the suburb The Bedford Park Journal can also be found below. 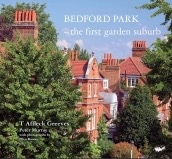 Co-founder of the Bedford Park Society, architect, Tom Affleck Greeves was well placed to write what is generally considered the definitive history of Bedford Park from its inception to the present day. This is a completely updated version of his book first published in 1975, edited by Peter Murray, Special Adviser to the Society, who is also an architect.

Tom’s original black and white photos are complemented by local resident Ellen Rooney’s recent colour pictures, which appear alongside a selection of old photos taken shortly after the suburb was built in 1875. Other illustrations include maps, drawings and architectural plans.

There are also profiles of the top Victorian architects who designed houses for the estate, plus notes on some of the celebrities of the day who lived in Bedford Park. 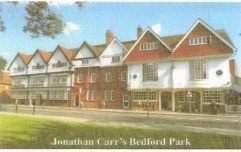 Over a decade of research by Dr David W Budworth, local historian and the Society’s former Historical Adviser, has gone into this book about Jonathan Carr and the development of the first garden suburb. The first part is a very readable narrative, while the second tabulates references – compiled from the Middlesex Deeds Register and local government records – so you can check the history of an individual property.

It is a hardback, illustrated by photographs and two specially-drawn maps, one showing the boundaries of the various pieces of land over which Carr acquired various rights, the other showing the houses which can be attributed to him.

David said: “I have documented the history in more detail and, I hope, with more accuracy, than has been done before.”

Bedford Park Pictures from the Past 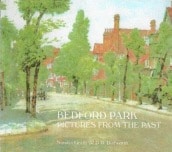 This is a compilation of photographs, drawings, paintings, maps and postcards dating from the first garden suburb’s earliest days to the mid-20th century. Put together by the Society’s former Historical Adviser Dr David W Budworth and former committee member Sandra Grant, it includes buildings, street scenes and interiors as well as some of the early residents. Extensive captions explain the history and background to each image.

The earliest are photos taken in 1878 – just three years after Jonathan Carr began his development near Turnham Green station – by Bedford Lemere, an eminent Victorian photographic company. The latest were taken in the 1960s when many houses were divided into flats or bedsits.

This is an illustrated, historical introduction to Bedford Park providing two guided walks. Written by T Affleck Greeves, the brochure concentrates on the original area built under the control of Jonathan Carr. The walks give readers an opportunity for examining the architecture of Bedford Park and identifying the houses once occupied by some of the more notable residents. The walks cover all the roads in Bedford Park.

To order your books

Costs of postage and packing per book/brochure will be added but we can offer free delivery in the Bedford Park area and arrange for you to pay when we deliver.

Annual Reports and the Journal

Printed copies of these publications are distributed to all members of the Society.

The most recent copies of our Annual Report:

* The current edition of the Journal is available exclusively to Society members.